The last few days of the Referendum are here, and everywhere are intense feelings. No one in Scotland is talking about anything else. Conversations are woven from serious emotions: hope, uncertainty, fear, irritation, anticipation, frustration, defensiveness, distrust, excitement, doubt.

It’s not just Scottish attachment systems, of course. They’ve been heightened across the whole of the UK – because it has become clear to everyone in the British Isles just how significant this vote is. The decision to be taken on 18th September has the power to formally change the character of the United Kingdom forever. That’s a point that the news this evening is describing as “hugely enormous”. The intensity metre notches ever upward….

Who will we be, after 18th September? Scottish? English? British? Yes-ers? No-ers? The courageous? The cowards? The landscape of identity has undergone an earthquake these last few weeks. Friends, neighbours, colleagues are falling out – or working hard to prevent that risk. We find ourselves members of groups that a few weeks ago didn’t even exist. We’re not sure how we ended up on opposites sides of boundaries, facing people that until this moment we thought we knew pretty well. Thus emerges another key attachment theme: the fear of separation from our group. Many people are whispering that they are genuinely scared to say what they think and feel; others are taking offence when they hear thoughts that surprise them. The earthquake has unleashed a plague of sabre tooth tigers.

I think of the story I heard of the child who came home from school crying, because a friend spoke accusingly to him when he learned his family was voting Yes; her parents were avowed No voters. I think of the two shop owners, both owning establishments on the same street, who ended up at one another’s throats and had to be wrenched apart by staff members. I think of a semi-detached house I heard described, with one side covered in Yes posters and the other in No posters, but spanning the space in between is a gigantic banner that reads, “We love our neighbours.”

So in the heated midst of total uncertainty, I find myself thinking ahead to the 19th of September. We are all going to need to continue living together on that day, and in the days and months afterward, whatever the outcome on Thursday. Once we know the outcome, will the anxiety we are feeling begin to ebb or might it linger, quietly corroding? 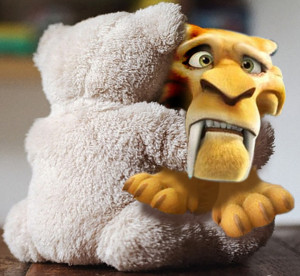 The central lesson of attachment is the need for resolution. Children become insecurely attached because their parents can’t make up with them. It’s not ultimately because parents don’t pay close emotional attention all the time. It’s really because those parents, for whatever reason, aren’t able to hear and respond to the child’s distressed feelings. Those parents can’t say ‘sorry’, for example by rocking their child in their arms or offering a sympathetic facial expression or attuning their voice to their child’s sadness.

On Friday, our nation will move into a new phase of the attachment process. Friday begins the period for resolution.

But it isn’t sweet. Its really, really hard. Therapy teaches us that. Warring couples who go to marriage guidance don’t relax once a decision is reached. Their strained attachment systems mean that they are even more likely to sling blame and accusations about who is at fault for the ‘fine mess’ they find themselves in. Two world wars also taught us that. The outcome of World War I didn’t take sufficient account of the pain that the losing side was experiencing. Blame and punishment ruled, rather than resolution and help. And so WWI was not the War to End All Wars, which everyone had hoped when the young men marched proudly off, a century ago. Instead, a single generation later, we found ourselves embroiled in yet another terrible world war. To what extent could that later pain have been averted if the victors in WWI (that’s ‘us’) had been able to offer greater compassion and help those who lost the fight (that’s ‘them’)?

The fact that the Referendum vote is poised on a knife edge means that, come Friday, half of Scotland is going to find itself feeling jubilant and relieved. The other half is going to be disappointed and angry. And the rest of the UK is going to have a whole host of feelings too. Rates of domestic violence are likely to go up next weekend. Fights on the playgrounds that we built for our children are likely to erupt.

The International Futures Forum has voiced a similar concern. They have been thinking about what can be done to enable more of us to “sit with whatever emotional pain manifests itself”  after the votes are in.

So come Friday, we are going to need tons of resolution. Here’s my suggestion: Let’s not wait til Friday. Let’s start now. Let’s start weaving laughter into our conversations.

Go find some bad jokes and share them with everyone you meet between now and Thursday. Laugh with your neighbour over a common memory. Risk looking daft by drawing a cheerful smiley face around the border of the poster you are displaying in your window. Share a comic video on Facebook.

Scots are brilliant at laughter. The ability to laugh is one of the qualities we are willing to take open pride in. (We help that along of course by giving it a slightly more humble title: ‘Taking the pish’.)

Evolutionary psychologists think that laughter emerged in the human species as a way of sharing relief  that the danger posed by sabre tooth tigers and other such monstrous beasts had passed.

If we can start generating that sense of relief now, it will do more than help us to pick up the pieces after the vote. It will actually help each of us, individually, to make a wiser decision about how we want to vote. Laughter creates physiological transformation. Sue Gerhardt puts it this way, in the second edition of her best-selling book, Why Love Matters,  released only last week:

“Nature appears to have built the apparatus of rationality not just on top of the apparatus of biological regulation, but also from it and with it. The higher parts of the cortex cannot operate independently of the more primitive gut responses.” (pg 6)

The calmer each of us are on Thursday, the better we will each be able to think and the more confident, as well, whether the vote you decide to cast is a Yes or a No.

In short, internal teddy bears thrive on a diet of laughter.

Here’s my own offering, to kick off what we could think of as a Resolution Revolution. Kevin Bridges has been kind enough to think ahead about the Time Zone Policies an independent Scotland might consider creating. Cheers, Kev.

2 thoughts on “Campaigning for laughter in the Referendum countdown”