In the Western world today, most young children spend at least some time in professional childcare.  This has come to be regarded as a normal way of raising children.  It is essential that staff engaged in childcare practice have a very good understanding of the science of connection.  The years that children spend in childcare are the years that their brain is growing most rapidly.

It is common to hear that ‘high quality childcare matters’.  Who could disagree with that statement?  People always nod their heads, in full agreement.  But then we create policies and childcare practices that aren’t high quality.  I have come to believe that we really don’t comprehend how much childcare practice matters – not just for our children, but for our whole society. 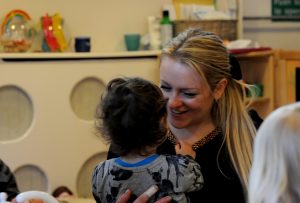 Here are three ways we can create high quality childcare for children.

First, we can ensure that children don’t feel they have been dropped off with strangers.  Young children are biologically programmed to be scared of strangers.  Children are just like the rest of us (grown-up) humans.  They can’t feel relaxed and safe with people until they get to know them.  Before children can relax into a childcare setting, and take advantage of all its ‘learning opportunities’, they need time to get to know the staff and other children.  This will take longer than only one or two ‘settling in sessions’.  Too often in our rushing world, children are expected to settle in too quickly. 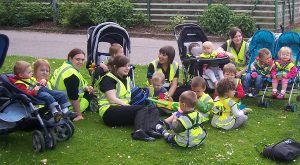 Second, we can pay attention to drop-off routines at the beginning of the day and pick-up routines at the end of the day.  These are the two most important moments of the day, for a child in childcare.  These are the moments that involve reunion and parting.  You are saying goodbye to Mummy or Daddy or Granny, and hello to your key person.  Then, later on, you get to say hello to Mummy or Daddy or whoever picks you up, but you have to say goodbye to the people you spent the day with.  Such transitions are emotionally tricky and often involve a fair amount of anxiety for children.  We adults often fail to notice that anxiety.  Its easy to overlook, because the signs of it are often subtle.  The problem is that if we create transitions that are regularly anxiety-provoking for a child, that anxiety gets permanently wired into their brain.

Third, we can be sure there are plenty of cuddles on tap throughout the day.  In the modern world, we have become scared of touch.  We are on guard against allegations of ‘inappropriate touch’.  Many childcare settings now have policies that encourage staff to limit the amount of cuddles they offer to children.  Sometimes those policies are supported by the belief it will encourage independence in children.  But that’s not what the science of connection tells us.  It shows without question that children needs lots of touch – especially when they are upset or anxious.  The reassuring arms of someone they trust produces a burst of the hormone oxytocin, and that’s what helps children to start to feel calmer.  It is not too strong to say that childcare settings who are reluctant to give cuddles are harming children’s emotionally – even though that is probably the last thing they intended to do. 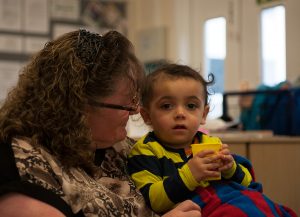 The three suggestions I have just given for childcare practice are all attachment-led.  The science of attachment, first begun in the 1940s, helped us to appreciate just how much relationships influence children’s development.

Since that time, scientists have discovered a massive amount about brain development.  We now know that relationships literally shape the neural connections in young children’s brains.  Every single thing that happens for a young child – or that doesn’t happen for them – leaves a physiological trace in their growing brain.

That’s why it is essential that all childcare practice be grounded in the science of connection.  Along with parents and grandparents, childcare staff are the very most important people in a young child’s life.  I am appalled that the pay our society offers them for their work does not in any way equal their importance.

This video gives a good sense of the kind of connection you can find happening in childcare settings: