Dominic Cummings’ strategy to hold on to power hangs not on what he included in his story.  It hangs on how well he told it.

I don’t mean it matters how well he performed it in the sunshine of the Rose Garden.  I mean it depends on how well he has fashioned his story to fit the shape of the classic Drama Triangle.  If he and the government can get enough people to join him in that Triangle, then he will have pulled it off.

What’s the Drama Triangle, you ask?  It’s a psychological concept developed in the 1960s by Stephen Karpman to help make sense of emotional conflicts.  It lets you trace the patterns and positions that hide in the murky waters of human relationships.

The row in which the UK finds itself, about the actions of a government advisor, is all about relationships.  The people versus the government.  The plebs vs. the politicians.  We thought we were all in this together.  People have sacrificed their most intimate wishes – to hold their mother’s hand as she lies dying, to hug away their child’s confusion – for the good of others.  They have honourably and painfully done their duty.

The row over Dominic Cummings is not about obeying rules, whatever it sounds like on the surface.  This row is about betrayal.

The people of the United Kingdom have not simply done as they were told.  They have sacrificed.  They have surrendered moments of love – perhaps the final moment they would ever be able to share – for the greater good.  They have suffered, with dignity and kindness and trust and grief. 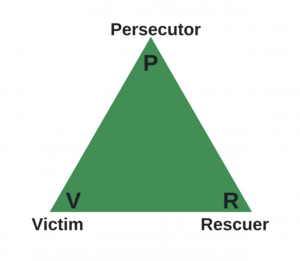 Dominic Cummings’ story makes a mockery of their suffering.  The government mocks its own people’s pain every time a minister stands up to endorse his story.  Betrayal isn’t hard to achieve.  All you have to do is look past the suffering you have had a role in creating.

The Drama Triangle helps us see all this murky stuff.

The Drama Triangle highlights the three positions people most often adopt in moments of conflict:  Victim, Rescuer, and Persecutor.  Some people prefer the language of comic books and Marvel stories: Victim, Hero and Villain.  Ultimately, all the positions are a path to victimhood.  “It wisnae me.  I done good.  I bear no blame.”

If you’d like to see the Drama Triangle in action, here’s my favourite video.

The position of Victim allows a person to embrace their victimhood.  It makes everything easy.  They don’t even have to wonder whether they had any responsibility in the matter.  A person can be a victim of anything. Cummings’ story allows him to be the victim of the media, a victim of his circumstances, a victim of the virus. He is even a victim of his own child. It was, after all, his own 4-year-old’s need for childcare that was the thing that purportedly sparked all the commotion. The child just happened to have London-based parents who, unfortunately, had not thought to plan in advance how his need for childcare would be met if they were felled by that Villain Virus.  It left his parents as victims of unforeseen circumstances.

But that’s okay.  Because it enabled Cummings to step into the role of Hero.

The position of Hero allows you to save the day, save the other person, save the situation.  You can be lauded for being the Rescuer.  You can feel good about yourself.  Cummings stepped into the Hero role as soon as he placed himself behind that wheel, whisking his sick wife and vulnerable son to safety, up in Durham.  It’s what any ordinary Hero Dad would do, isn’t it?  The government has confirmed that every caring father in the land would have been wise to follow in Cummings’ footsteps.  You haven’t thought to arrange local childcare?  No worries.  Just strap your child into the close quarters of your car and drive 250 miles with both parents sneezing out COVID molecules.  That’s what Heroes do, you know! They whisk others to safety!

It’s a shame Cummings didn’t have a magic carpet to hand.  It would have been faster for the lad.  And it would have kept him outdoors, too, which we’ve learned is a safer place to be.  But I digress.  Magic carpets?  That’s the territory of fairy stories.

Yet, wait.  Maybe they kept the windows rolled down through that whole long journey?  I mean, that would have let the air blow about the carriage, shooing the virus molecules out into the soft night air.  Surely any ordinary Hero Dad would have thought to do that, in order to keep his vulnerable son safe from the Villain Virus?  I wonder why Cummings didn’t mention that, when he was telling his story in the Rose Garden?

I mean, he thought of so many other ways to occupy the role of Rescuer.  He drove 60 extra miles to check to see how blurry his eyesight was, before he embarked on the gruelling return journey to London.  And he is such a Hero in Shining Armour that he didn’t even think to ask his wife to take the wheel.  Knights who ride in on white horses always stay in charge of the horse, you know.  They never ask the frail princess to take the reins.

And there was that valiant night-time drive Cummings made to the Durham hospital, after his young son had needed an ambulance ride away from the country cottage.  (Wait.  What about the paramedics and the medical staff who were placed at risk from the virus molecules the child might be spreading, having picked them up in London?  Shhh.  This story isn’t about those people.  This is about Cummings and his own nuclear family.  Besides, it’s not really a country cottage.  Haven’t you read his account?  It’s just “sort of” a set of “concrete blocks” on some private land.)

And don’t forget that Cummings really has been a valiant servant to the government, throughout this pandemic.  There was that moment, right at the start, when he had to run home to his sick wife.  She had called him, feeling ill.  There’s footage of it on the internet.  Didn’t you see how fast he was running?  But when he got home, it turned out okay.  She wasn’t so very ill.  He was able to return to the office, ever the loyal advisor.  (Wait.  What about the colleagues to whom he might have brought back the virus?  Doesn’t he have a responsibility to protect them?  Shhh. This story isn’t about those people.  This story is about Cummings the Hero.)

Okay, what about the Villain then?  How does that position on the Triangle feature in this story?

Well, Cummings flirts with that role, when he insists that he’s behaved appropriately and legally.  He’s done nothing he needs to apologise for.  Villains are always right, you know.  And the Prime Minister agrees.  What is there for you all to complain about?

So really, it’s everybody else, isn’t it?  You can’t have a real Hero without a vicious Villain.  There are actually several to choose from, in this morphing story.  First there was the media, hounding him outside his house, distressing his wife and child.  You wouldn’t seriously expect him to place his parents at risk of badgering too, would you?  That’s why he kept his visit to them secret.  He wanted to protect them.

And there was always the virus.  We’re all fighting that Villain.  We’re all scared he’ll turn his invisible scythe on people we love.

And now there’s you, dear public.  You really are turning into persecutors.  You refuse to believe Cummings’ story.  You refuse to quit pressuring the government.  You refuse to let his full and frank explanation in the Rose Garden be sufficient.  Now you are making fun of him on social media. You refuse to let this moment pass, so that we focus on more important things. Stubborn plebs.

The people are the Villain now.